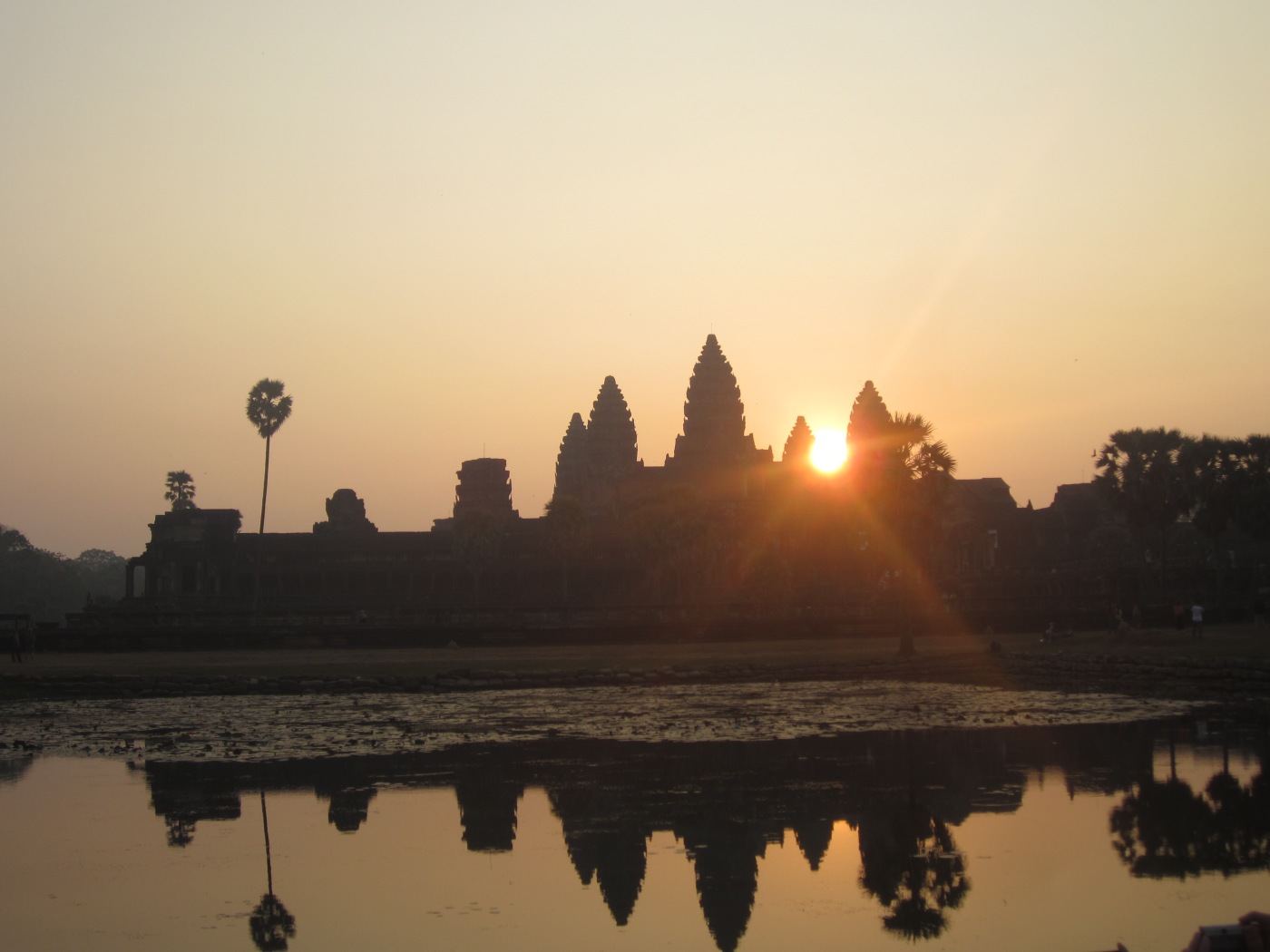 We got stamped out of Thailand ok, which is interesting – gambling is illegal in Thailand so there is a huge strip of casinos in no mans land where the Thais go to gamble. This is when this border crossing got a little more testing, as we had read various things about scams that happen whilst crossing the border. We’d done our research and were prepared. The first scam that you encounter is that someone will board the bus and say that you need to pay him to do your visa for you. You don’t. You can get it done at the border for a reduced cost of what he would like to charge. He really does pile on the pressure and make you feel as though you won’t get across the border. As a result of this we were the only people on the bus to resist his charms.

We went to the immigration and filled out the necessary forms and paid the fee to obtain our visa. We then joined the very long queue to get our entry stamp. This queue just didn’t seem to move, so after an hour or so where we could see everyone else from our bus getting their stamps we eventually gave in and paid $5 to skip the line too.

We eventually arrived in Siem Reap at around 7pm, and caught a tuk tuk to our hotel. The next day we wandered around Siem Reap visiting the Angkor National Museum for some pre history and visiting the markets and supermarkets to stock up on Dr Pepper (I was VERY excited to discover this on sale in Cambodia). That night we caught up with Joey’s cousin and wife who were on holiday in Vietnam and Cambodia at the time. We also spent an evening on Pub Street, not that we remember much about that. It did lead us to losing the key to the safe box in our hotel though which contained our passports… luckily this was a $5 fix.

Through our hotel we organised a tuk tuk tour to Angkor Wat. We toyed with the idea of hiring bikes and cycling, but in the end we were very glad that we didn’t take this option. The temple complex is VAST, it’s really hot and we would not seen as much as we did if we had cycled round (let’s not forget my sense of direction here). Just exploring and climbing some of the ruins was exhausting.

We opted for a 3 day ticket to explore the complex, the first day we went during the day to tick off some of the big sights such as the Bayon Temple and the Temple of Ta Prohm, which of course featured in the film Tomb Raider.

The next day we arranged for our driver to pick us up at the crack of dawn so we could see the famous sunrise over Angkor Wat. Crowds were already gathered at the lake when we arrived so it was a jostle to try and get some shots that didn’t feature someone else’s head or hands. Many people disappeared once it had got sufficiently light and actually missed the sun rising over the temple, so if you’re going to do this at least stay to the end guys.

From Siem Reap we took a bus to Battambang, or as we liked to call it – Battenberg. Battambang is a picturesque town on the river full of French Colonial architecture. It was a very pleasant place to while away a few days and we stayed in a lovely guesthouse which had recently been completed. We took a tuk tuk from the bus stop to our guesthouse and as we approached a very nice looking tall building we joked to one another ‘wouldn’t it be great if that was our place?’ imagine our glee when it actually was our place! We did a self guided walk around the city and just whiled away the rest of the time by the river.

From Battambang we headed to Phnom Penh where we needed to obtain visas for Vietnam. It was approaching Chinese New Year where everything shuts down for about a week but we were lucky enough to find an agency to help us and return our passports fairly quickly.

It was Valentine’s Day when we arrived in Pongy Den, I mean Phnom Penh. We rocked up to our place, and were greeted by a very basic room, grubby sheets, long black hairs all over the bathroom and a sink that was on the verge of falling off the wall. This guesthouse didn’t even make into our top five worst places that we had stayed. (Obviously Sacramento in Uruguay was number 1).

That night after dinner we took a stroll along the Mekong river bank and Joey noticed a sign for a evening cruise for $5 each. Well it was Valentine’s Day, so we hopped on board which was lovely and possibly the most romantic thing Joey has ever suggested!

The next day we visited the S21 prison. This is on the site of an old secondary school and is now a museum which tells the tale of the Khmer regime. Between 1976 and 1979 it is estimated that 20,000 people were imprisoned here, who were in turn tortured and executed. This is a difficult museum to visit and it is hard to comprehend the extent of what went on here, only a few years before Joey and I were born. After here we visited the Killing Fields. Again, this is not a visit for the faint hearted, the audio guides tell some incredibly graphic tales that left me in tears and there are bones and cloth visible in the ground. Nonetheless it is important to acknowledge that these terrible crimes have happened and to remember the victims. The site is as sensitively protrayed as it can be without losing the horror of what happened to so many people.

After all this sorrow we decided that we needed to head to the beach. We had booked a beach break, just outside the famous Sihanoukville. The place sounded fantastic with a quiet, almost deserted beach with a sunset to die for. And to some extent it was just that. The drawbacks were that the place was as described – in the middle of no where so we had no choice but to stay there for breakfast, dinner and lunch.

We caught the bus from Phnom Penh and had read that we could leap off the bus at a point in the road and pick up a tuk tuk from that point. We saw another couple doing just that so we did the same. It was very rushed and chaotic getting off the bus, and whilst myself and this other lady were negotiating with tuk tuk drivers Joey and the guy were sorting through bags to get to ours. Somewhere along the lines there was a misunderstanding and bags that didn’t belong to either of us got pulled off the bus. It was only after the bus pulled away and neither of us were loading those bags onto our respective tuk tuks that we realised we had accidentally stolen someone else’s bags.

Upon arrival at the place we looked at the flight label and found the person’s name, did some Facebook stalking and found the person with that name with a resemblance for someone who had been on the bus and sent them a message to let them know that we had accidentally taken their bags, and would take them to Sihanoukville bus station the next day. In those days, Facebook messages from strangers weren’t sent as requests – they were instead sent into an inbox called ‘other’ which no one knew about, so the guy didn’t see the message, until a year later! I’m very happy to say that at that point he messaged us to say that he had indeed been reunited with the bag (and, unknown to us, the contents contained 500 Australian dollars and all his bank cards – never put your cash and cards in hold luggage kids).

That night we had dinner with the couple from the bus, they were on holiday and she was suffering from our old friend, Traveller’s diarrhoea, and rushed from the dinner table to throw up into the sea. The guy who ran the guest house was a bit crazy but the sunsets were to die for.

After this we headed to Sihanoukville for a night, just because we thought we should experience it. It was loud, full of hustlers, but on the other hand I got a massage on the beach and drinks bought to me, so not all bad.

We then headed back to Phnom Penh for the night. We’d booked into a hostel and a 4 bed dorm for the night. This was more like a cell than a dorm with no windows and a lack of circulation. One of the guys was a fair bit older than us and thought it was great dorm etiquette to eat his fried chicken in the airless dorm. Then not long after I’d got to sleep the door opened and it was a hostel employee who came in to accuse someone in the room of smoking. We weren’t.

The next day we caught the bus to Ho Chi Minh City (formerly known as Saigon). This was actually one of the best bus journeys we had had – there was free wifi on board which was more reliable than some of the wifi that we’d experienced in guesthouses and hostels.

As we had to obtain our visas in advance for Vietnam we weren’t too worried about this border crossing. We arrived at the border at around lunchtime, and got our exit stamps pretty easily. The bus driver called time for lunch at the border crossing. We had about $3 left so we had a conversation on what we should buy for lunch. We reached the unanimous verdict that our last bit of cash would be best spent on two cans of Barcardi and coke and enjoyed on the steps of the border point whilst the rest of the bus ate what looked like unpalatable chips.

The next part was slightly more worrying as we had to hand our passports over and wait in a hall way for the Vietnamese guards to call our names. We had to carry our luggage and the hall was very crowded, so when your name was called you had to make your way through the scrum to collect your passport and stamp. Joey had his name called first so he had to leave me wearing my rucksack in the throng. Who knew if we would see each other again?!

Of course it was only a matter of minutes until we were reunited again and we were heading to HCMC.