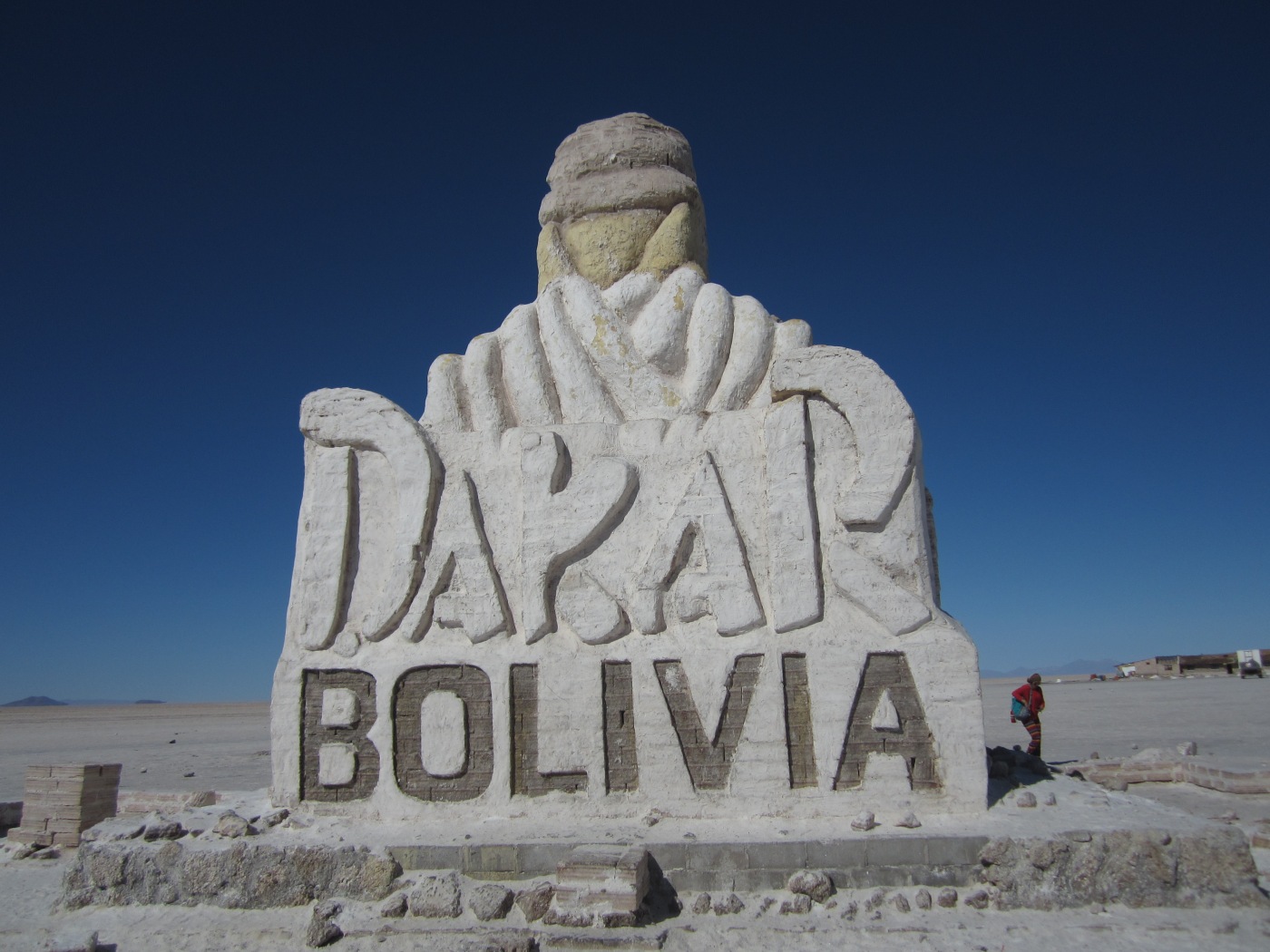 From San Pedro, the salt flat tours start by taking you to the Bolivian border point, which is really just a shed in the desert.

The tour continues through the desert in a fairly old jeep, there will be probably be around 5 of you in each vehicle. You will call at various points along the way such as numerous Lagoons and see so many Flamingos! After two days of this you start to get a little lagoon fatigued, especially if you are suffering from the altitude. You stop for lunch and will meet up with the rest of the group at various points during the day, before spending the night in some pretty basic accommodation. It was dorm like, with the 5 of us sharing a room for the night. Showers were available but hot water will cost you.

The next day continued in the same vein, climbing ever higher and visiting more lagoons and seeing hundreds of flamingos. The route can be incredibly dusty so worth taking a buff to shield your face. Our jeep broke down several times (not what you want in the middle of the desert) and the driver only had one CD (although I do now have incredible memories which come back every time I hear “International Love’ by Pitbull) The scenery is pretty spectacular though and you may strike lucky and have some fun travel companions. That night we stayed in more basic accommodation, but this time there were only three of us in the room. We had a very early start the next day to finish the drive to the salt flats and to catch sunrise there. It was well worth that alarm going off at 4am to see this sight.

The tour continues across the salt flats and onto a cactus island which is a site to behold on it’s own. Where do they come from? How do they grow in the land of salt?!

The final stop before reaching the town of Uyuni is at the Train Cemetery, as the name suggests, the resting place of many a train. This is basically a giant playground for grown ups where you can climb, swing and explore the relics.

We found some small piles of salt and I made Joey relive his days as a junior hurdling champion.

Beyond the salt flats and train cemetery, Uyuni doesn’t have a lot to offer, but it was a good place to rest and recover from the first of many bouts of traveller’s diarrhoea! You can’t avoid it – you will get sick at some point!

After Uyuni we headed to Potosi. If you thought the altitude sickness on the salt flats was bad… well welcome to Potosi! Even a flight of stairs takes momentous effort and you wake up gasping for breath. We arrived in on the weekend of the Bolivian elections so no alcohol was being sold and everything was shut. We whiled away our time playing cards and marvelling at how the hostel was basically a meeting place for the women of the town to sit around and chew coca leaves. Coca leaves are chewed or brewed as a tea to purpotedly help with altitude sickness. They are of course what cocaine is extracted from so these ladies were using our hostel as a place to quietly get high.

From Potosi we headed to Sucre – a beautiful colonial town which was our highlight of Bolivia. Best of all? It had a supermarket!! These were surprisingly hard to come by in Bolivia. There are also some dinosaur footsteps which you can catch a bus out to see. They are in a vertical wall, not because dinosaurs defy gravity, but rather due to tectonic plate movements. Make sure you go the right way when catching the bus (this of course did not happen to us….). After Sucre was La Paz, where we stayed at the Adventure Brew hostel. They served free beer – we quickly came to realise though that when a hostel offers free alcohol, it’s not the finest but still it gets you drunk. We had an epic night out in La Paz during which I’m told Joey gave me a piggy back and had a slight tumble… I deny being a part of this activity as I can’t actually remember.

We arrived early in the morning in La Paz and after dumping our bags at the hostel we headed out to get some breakfast. We were keen to try The English Pub, where we could get a fry up (occasionally you just got to give in to the comforts of home). It was fairly early still and we met a very drunk (but pleasant) English guy in there. As I mentioned it was early and we weren’t sure if he had been there all night or was just getting started, but he came across to us as one of those young, irresponsible drunk backpackers that occasional encounter and we were a little embarrassed to share the same nationality as him. After this encounter we went and caught the Red Cap walking tour – again a tip based tour which we can highly recommend.

We booked to cycle the Death Road with Gravity bike tours. To anyone who doesn’t know, the Death Road is a 60 km road linking La Paz and Yungas which when open to traffic used to see 300 deaths a year thanks to the single track, lack of guardrails and the steep descent / ascent.

The road is now closed to normal traffic and is instead used solely for cycling. Still just a few months prior to us cycling the route a cyclist had died, with rumours being that they were taking a selfie at the time.

We met up with Gravity at the same English Pub where we had been a few days earlier. We were excited and not at all worried about what lay ahead.

Until we saw who our guide was.

Yep, it was the drunk English guy that we had met previously. We looked at each other and wondered if it was too late to back out. Instead we crossed ourselves and prayed that we would get out alive.

You catch a minibus to the start of the route, this is a slightly uphill part which is actually on a working road. Due to the altitude of La Paz it is FREEZING up there – there was snow at the top. Despite all the gear provided And me wearing various layers, my Raynauds Syndrome got the better of me and I had to beg to be let into the minibus. Thankfully our guide was actually a really good guy and could see that I could ride a bike and actually understood my condition (kudos dude) and I got to ride to the start of the actual death road in the warm minibus.

Gravity lead the tour in the best possible way by stopping at incredibly regular intervals and giving regular safety talks and how to approach each section. I really can’t fault them and would like to apologise to our guide for initially misjudging him, he was absolutely brilliant. As the descent is 3500m, you start off freezing before descending into the humid jungle.

The day finishes with a trip to an animal refuge where you can meet various monkeys. be warned though – these creatures are strong! The day before one of the volunteers had had a piercing ripped from her ear. You’re told to secure all your personal belongings before entering the enclosure and this is strong advice. It’s also a pity as I wasn’t able to capture the moment that the alpha male reached out for Joey’s hand and walked hand in hand with him. Perhaps he mistook his bushy beard for a rival and was capturing him to dispose of him?!

From La Paz we caught the Bolivia Hop bus to Copacabana, the main Bolivian town on Lake Titicaca with the aim to cross the border to Peru safely. During our time in Bolivia we had heard so many horror stories about people getting robbed and scammed at the border we decided that this was the best way to do it. Lake Titicaca is the world’s highest navigable lake, at a height of just over 12,500 feet.

Many a traveller that we had met told us we should go to the Isla del Sol, so taking this option of the Bolivia Hop and staying a couple of days meant that we had the whole day to spend gently exploring the island. Our ‘gentle exploration’ started when we were dropped off at one end of the island at around 10am with the aim to get over to the other side of the island to catch the last boat back to the main land at around 4pm, the length of the hike was only around 5 miles so very doable in a few hours.

Or so we thought.

I repeat my statement that Lake Titicaca is the world’s highest navigable lake in the world. Potosi is only 1000 feet higher and all I did there was try and climb some stairs. The landscape on the Isla del Sol is extremely undulating and the sun was beating down on us, so what would ordinarily be a pleasant stroll became incredibly difficult. There are lots of ruins along the way for you to explore and the views are stunning but after a while as you go down another hill that you only have to climb again I started to tire. Alongside the hot sun, the altitude and the seemingly never ending undulation was the added surprise of having to pay around five separate tolls to cross the island! This and the pressure to get across to the other side of the island in time to catch the boat back to the shore or have to stay the night and miss our bus the next day made this hike one of our least enjoyable. Which led us to question why so many backpackers had recommended this to us?! Did they want others to suffer as they had before us? Our photos from our time on the island are stunning, so if you put the exertion and extortion behind you then it is worth a trip. As long as you are prepared for what lies ahead!

After our experience on the Isla del Sol it was time to cross the border to Peru, find out how we got on with that here.